Church Services are at 9:30am, alternating between the churches in Garvald and Morham. The minister, Rev. John Vischer, also attends to the West Church in Haddington.

There is a Sunday School for children of all ages and coffee is served after each service. Communion is celebrated on the first Sunday of March, June, September and December. Other highlights of the church year include the Christmas Eve Carol Service and the Maundy Thursday Service.

All are welcome at the church. Requests for prayers can be placed in the prayer boxes in the church foyers.

John Sheldon always creates the beautiful Harvest display for the church, using an old barrel that was used to measure a bushel of grain. It came from Garvald Mains Farm and was given to the church by Robert Hamilton.

The white cross is displayed at the Remembrance Service in Morham Church. It was brought from a WW1 graveyard in France and is in memory of Sydney MacDonald who came from a farm in Morham. He died in action in September 1918. When the graveyard in France was being relocated, the authorities contacted Sydney MacDonald’s family to give them the cross and they subsequently donated it to the Church. 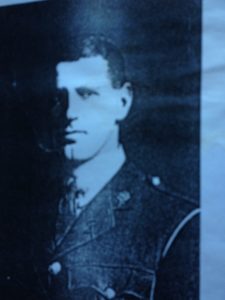 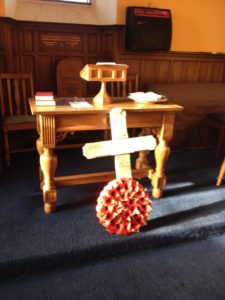