Stenton Horticultural Society is having a  Gardeners Question Time this Friday 21st February, 7 for 7.30pm at Stenton Village Hall. £5 entry. A special invitation is extended to gardeners in neighbouring village Garvald. On the panel –

Helpers needed to keep our village hall a great venue for the whole community!

See the poster, below.

Hopefully the strong winds and rain didn’t cause too many issues but I thought it would be helpful to share information received from the Met office this morning advising what to expect over the next few days:

Following on from Storm Ciara, we are now seeing the colder air across the country with showers of sleet and snow affecting parts of the country. The main story for the week will be for these colder conditions to remain through most of the week.

The main focus for today and tomorrow is the wind and snow warning that is currently in force until midnight Tuesday. This warning is for low likelihood of medium impacts and covers much of the country with the exclusion of some far eastern areas. These showers are likely to fall as snow, even to low levels at times, with higher accumulations more likely across western and southern areas and higher ground across Scotland. The generally strong winds will gusts to 50-60mph at times. As ever, the level of impacts and disruption will depend upon where the showers fall, as not all areas will be affected. However, the combination of snow showers and strong winds, with the likelihood of blizzards and drifting snow in places, are likely to lead to the disruption to travel and power supplies in places throughout Monday and Tuesday. There is also potential for frequent lightning from these showers, which could also lead to some impacts on power networks. In addition, ice will form overnight. This brings a risk of injuries from slips and falls on icy surfaces, bus and train services may be delayed with longer journey times. There is the potential for accumulations of 1 to 3 cm above 150 metres, although in heavier showers this may come down to lower levels. 5-10 cm is possible above 300 metres. Snow will gradually build up and in a few locations, accumulations of over 20 cm are possible by Tuesday evening over the highest routes.

We are continuing to monitor the snow showers, where they develop, their intensity along with looking for consistent model solutions. This could lead to a short notice increase in confidence of where medium impacts could be seen, resulting in an increase of the warning up to amber. We are currently keeping a close eye on southern Scotland during Tuesday afternoon but there has so far been too much model inconsistency to raise the likelihood. We will continue to monitor this.

With the warning area covering into Northern England there is the potential to see further impacts to cross border travel, especially in the west, with disruption to road and rail transport.

There is currently a warning for snow and ice from midnight until midday on Wednesday. This is likely to be updated this morning to move into the low likelihood of medium impacts. The area of this warning is largely the same as for Monday and Tuesday, with only eastern coastal areas not in the warning. By this point there will still be some snow showers around, but they will be becoming less frequent. However the overnight temperatures will have dropped, and the showers bring difficulty in treating surfaces.

These showers are likely to lead to further accumulations of snow above around 100 metres with 5-10 cm of snow possible above around 250 m . Any snow accumulations over lower ground are likely to be temporary. Impacts are likely to see some roads and railways affected with longer journey times, some injuries from slips and falls on icy surfaces with some icy patches on some untreated roads. The potential to impacts across the border continues on Wednesday as well so disruption to cross border road and rail travel remains possible.

After Wednesday we will start to see a little respite in the weather. We will continue to keep you informed of any changes to the story throughout the week.

The warnings can be viewed on ourApp, or the Met Office website.

The AGM for the fundraising group Friends of Garvald Church will take place in The Stables on Monday 17th February at 7.30 pm. Everyone welcome

See the news release from East Lothian Council, below, announcing details of two further public drop-in sessions to discuss plans to enhance parking provision in Haddington. The events will be held in the Town House on 25th and 26th February from 2pm to 7.30pm each day.

Everyone with an interest in the subject is welcome to attend. Further details here:

LOST: key with blue fob. If found, please hand in to Elaine MacMillan at Whitelaws, Garvald. 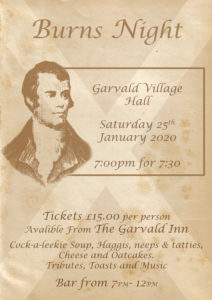 Meeting dates for 2020 are now on the Garvald and Morham Community Council page (see link above).

Outlook:
Remaining windy and cold on Wednesday with further showers pushing in from the west. Winds will be strongest again in the west but aren’t expected to be as strong as today so warnings look unlikely at this stage.
Turning slightly milder on Thursday with some rain and snow melt; the potential for any localised flooding issues will be assessed later in the week.
Friday will be windy across the far north but likely turning more settled across much of the country.

The latest warnings can be seen on Hazard Manager, on the Met Office App: https://www.metoffice.gov.uk/about-us/what/met-office-weather-app

Advice for travelling in storms, rain and strong winds can be found here.
Please also see this morning’s Flood Guidance Statement for the most up to date information on the coastal flood risk across Scotland over the next five days.

As a result of stormy winds coming from the South West since New Year several large, very rigid, foam insulation boards have been blown into the Garvald park and become trapped amongst saplings on the steep bank above the Papana Water. A large amount of smaller detritus can also be seen trapped against fences in the field above the park. The full-size boards are approximately 3m square and 240mm thick.

The flying boards, in gale-force winds, represent a potentially lethal hazard to people and animals. They could easily damage windows of the houses, greenhouses and vehicles and bring down power cables.

The community council, as a matter of urgency, is trying to find out where these boards might be coming from. Anything that might take off in high winds should be stored inside or stacked properly tied and weighted down.